Body of article is reprinted with minor editing from the International Association for Obsidian Studies Bulletin 10:2 (1993)

The pictographs shown below are two components of a rock art complex located near Devil’s Lake at the southeast foot of the South Sister Volcano in the Oregon High Cascades. This group of pictographs is found on boulders of obsidian that are located at the southernmost member of a 6 km-long alignment of Holocene rhyodacitic obsidian domes. The pictographs are unique in Oregon because they are found on geologically-recent rocks - the eruption of the volcanic tephra that immediately preceded the extrusion of the obsidian domes has been well dated at about 2,000 14C years (Scott 1987). The unique association of radicarbon dates and obsidian eruptions make these pictographs the most solidly dated of any in Oregon. First described by Luther S. Cressman in 1937 (printed upside down), and later by Loring and Loring (1982), the rock art at this site has been successfully restored after suffering serious spray paint damage by vandals. The now unmarked site is located only a few meters from a major Cascades highway. The line drawing of the pictograph was extracted from an early cultural resource overview conducted for the Deschutes National Forest (Dudley et al. 1979:452). 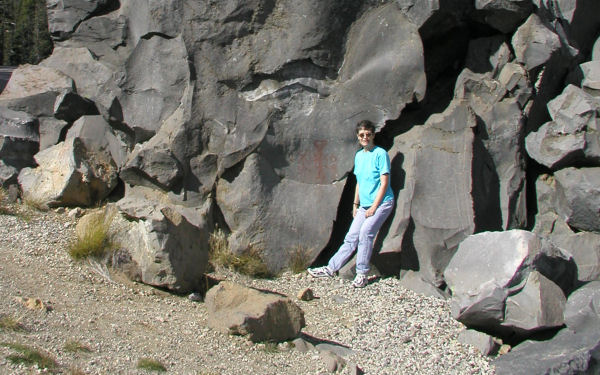 A view of the rock art logo in late 2004 (to the immediate left of the person). 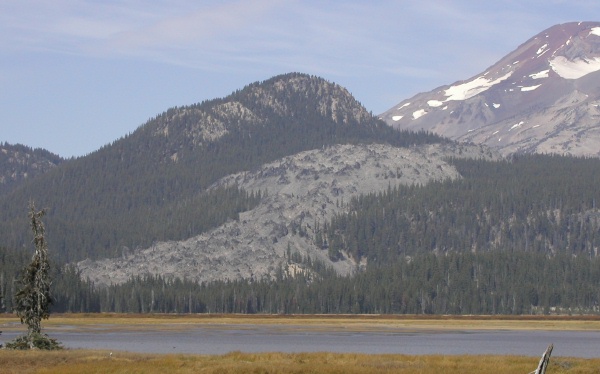 The view north from Sparks Lake towards the Holocene alignment of rhyolite-obsidian domes on which the lab logo rock art is located. South Sister Volcano is located in the background.